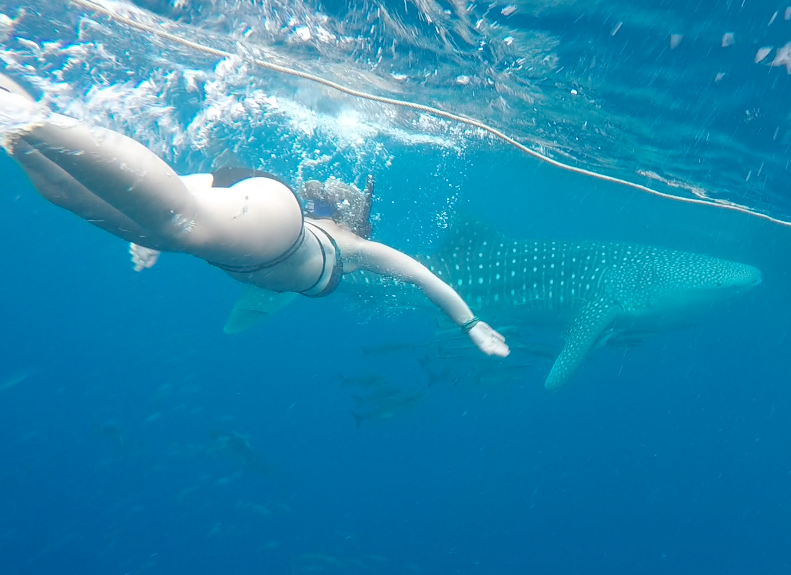 As previously mentioned, one of the best things I’ve ever done was get my open-water diving certification, in Koh Tao, Thailand. The name of the dive company I did it through is Big Blue, and I’m so glad I went with them for many reasons. I’ve always been passionate about the environment and especially ocean conservation (I wanted to be a marine biologist for most of my childhood/teen years). Thailand is rather behind on waste management, plastic reduction and recycling but Koh Tao was one of the exceptions. Given that many of the islanders are actually expats from other countries that migrated there to either dive or teach diving probably has a large effect on the different vibe Koh Tao has in regards to conservation, as well as the caring locals who grew up and live by the ocean vs those living in the city. 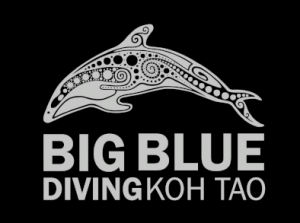 Big Blue is one of many dive resorts on the island and they are a waste free zone as much as possible. They do not sell plastic water bottles, which most travellers are stuck doing in most of the country, but they do have filtered water stations where you can fill up your own. They offer PADI and SSI courses, the only difference being that SSI is mainly based online rather than on paper and the certification card itself is on the app rather than sent as a plastic card. They push everyone to go through SSI for these reasons, and that is what I and most of my group did as well. They also host ocean cleanups and run various conservation programs for divers to get involved in who are already certified. They advertise them all over the resort, next to posters and facts about conservation and endangered species. It’s easy to tell how much they care about the ocean.

Most importantly, they teach ethical, ocean safe diving that not only promotes adventure and appreciation of this beautiful underwater world, but how to dive safely, respectfully and to contribute where we can for a better underwater environment. They are extremely strict about not coming into direct contact with any marine life that doesn’t come up to you on it’s own. You cannot reach for fish, or touch rays and sharks, and cannot disturb the coral reefs and plant life. They teach a basic hover technique which includes knowing your buoyancy, proper breathing, weight and body positioning in order to glide over reefs and hover close without touching them as much as possible.

The following video is one I created using clips from a longer professionally-made video of our final dive through the open-water SSI program at Big Blue, which I purchased. The shaky, excited whale-shark footage is my own and the music (Gooey-Glass Animals), belonged to the original video soundtrack. I chose specific shots to encapsulate what it felt like as well as some of the amazing things we saw that made me completely obsessed with diving.

You can see the hover technique in action (far more successfully with the dive masters), chats regarding local species to be aware of and how to interact with them (do not engage the triggerfish and avoid their cone of space!), and most importantly the conservation project they were currently working on with the only local family of clown fish in the area, due to lack of the proper anemone habitats they need to survive. The ring of rocks around the anemone creates a barrier for certain species and to mark the space as a protected zone that is being observed and worked on by expert divers. They briefed us on everything we needed to know on the boat beforehand and in between dives at two different locations. 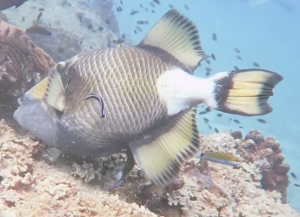 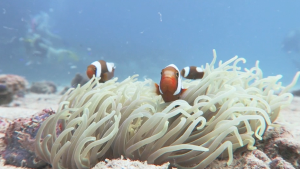 Nemo and friends! (close up of anemone) 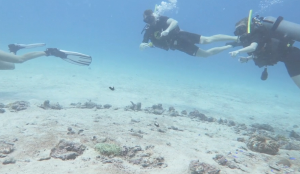 Our time at Big Blue ended in the best way possible when a juvenile whale shark decided to make an appearance and proceed to follow us around and circle our boat for almost half an hour on a fun dive, the day after our last dive of the certification. It was incredible. Apparently they enjoy the bubbles created by divers which is why they often linger. It was such a privilege to end our stay this way, and I would have stayed on that island for so much longer. 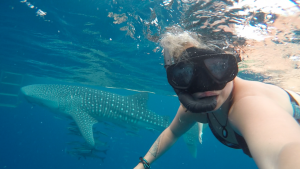 I plan on returning as soon as I can to complete my next level of training and hopefully some day take part in some underwater conservation. Diving has already influenced my art practice in a lot of ways (which I will get into more later), and I hope to bring some of what I learned to my own future classroom, as a way to get students thinking about different environments, eco systems, and why it’s important to protect them.